Built in spring 1971. At the dawn of the computer age. Inspiration for many engineers and developers.

This website is dedicated to the world’s first commercially available personal computer and the only existing prototype. This website has no ads, does not use cookies, will not track you and is hosted in the European Union.

After taking care of John Blankenbakers former webpage to preserve his legacy and the history of the Kenbak-1 I decided to make a registry of the Kenbak-1. Someone should preserve it and follow the path of the few original Kanbak-1. I also maintain the Apple-1 Registry already. It is more effort and work than you can imagine. But the result is worth it.

The direct contact and many conversations make me feel very connected to John. It was the twist of fate that he was ahead of his time. He even planned a successor with CPU. But since the computer was only advertised in American Scientific, the commercial success was low. Who knows, maybe otherwise we would have been working with a 'Kenbak-X'?

John Blankenbaker was 92 years old when he stopped maintaining his website. The website was down. I had contact to him for years, visited him twice and finally he gave me permission to resue the website and keep his legacy alive. John wrote to me March 4, 2022 "Yes you may have the content. I used a .net designation. Perhaps you might want to convert to a .com or a .info designation."

Note: His website is very old and static, not suitable for mobile devices. Changes were made very carefully to preserve the original state as good as possible.

The Kenbak-1 was a commercially available computer from 1971. Years before the Altair, IMSAI, Apple etc. showed up.
Inventor was John V. Blankenbaker from California. It was created before any microprocessor was available. John had in 1971 a look to the first microprocessor shortly after creating the prototype but the first microprocessor could not improve the design.
The idea to build the Kenbak-1 was born in fall of 1970. By spring 1971 John Blankenbaker had the prototype built. All by himself from scratch. The computer is very educational and John wanted to sell the Kenbak-1 mainly to schools.

John V. Blankenbaker was one of the early computer entrepreneurs starting and working in a garage. He designed the computer and all manuals etc. by himself. The name Kenbak is obviously chosen from his last name Blankenbaker. Here is the story.
The Kenbak-1 was unfortunately sold only about 40 times. The personal computer revolution started years later. The story of the Kenbak-1 is one of those tragic stories in history. The company couldn’t afford to place more ads, for example in Popular Electronics. And so, the company was slowly running out of money.
Later the company was sold and the successor, the CTI Education Products Inc., including building material for many Kenbak-1. This company sold only a few Kenbak-1's under the name H-5050.
This company never paid John Blankenbaker and eventually sent him back parts for some 45 Kenbak-1 as some kind of payment.

John advertised the computer only in the American Scientific magazine from September 1971 for two or three issues. Probably focusing on private individuals and advertising in the Popular Electronics magazine would have resulted in a much bigger success. Like it was for the Altair 8800 in 1975.

Today, only a few original Kenbak-1 still exist. Today only 14 machines are believed to exist worldwide. Revision A and B boards exist. And only one prototype was ever built. If the Kenbak-1 is considered the first commercially available personal computer, then the prototype is the very first ever.

Differences between the prototype and the production units

The Kenbak-1 was never bread boarded or tested prior to the design of the mainboard. Remarkably John's design had only a few errors and just a few additional wires and other minor changes were required.
Only the prototype has a red enter button. This was changed for the production units and an additional switch was installed to protect against changing the program status. The production units have a slot in the front for a possible punched card reader which was never available. The legends below the switches were relocated for better reading.
Just a few changes in the design of the motherboard for the production units were necessary. The prototype got some hand-soldered additional components.
The case was colored by John Blankenbaker himself. He gave a sample of the color to the company that produced the production unit cases. For this reason, the color on the prototype is not consistent and scratches are more common.
The prototype has no serial number or labels. Production units started with serial number 167. John lived 12167 Leven Lane, Los Angeles.

The only existing Kenbak-1 prototype

The first of the first personal computer.

I was ever fascinated about the Kenbak-1. Very rarely this unique computer from 1971 is available to buy. John Blankenbaker created this computer from scratch by himself. Later it was sold in small numbers.
I called John Blankenbaker and asked him if he still own a Kenbak-1. And yes, he still had his one and only prototype of the Kenbak-1. More unique is impossible. His granddaughter was playing with it when I called him. Unluckily he gave it to an auction house just some weeks before I called him.

My final bid was not high enough and for technical reason I had no chance to bid more.
Just by chance I had contact to the new owner of the Kenbak-1 in 2018. After some talks, we had a deal. Probably only 15 Kenbak-1 still exist. And only one prototype.
From my point of view the fact that it is the only prototype and the very first was highly underestimated and I was more than surprised to get the chance to buy it.

The last owner of the Kenbak-1 prototype is a very friendly and interesting men from California. He got his own business and works for Computer History Museum as well. We spent a day talking.

After picking-up the Kenbak-1 in a small town close to San Francisco (California) I visited John Blankenbaker and his wife in Vermont. They invited me to stay at their home. Both are such friendly people.

John plugged the Kenbak-1 into the wall socket, before I could say ‘wait, shouldn’t we check the components first?’. switched it on and started to program it. The Kenbak-1 instantly worked and I got it on video!
Amazingly, John was 88 years old when he entered the program in his prototype. It was 48 years after he built the prototype.
Eventually John signed the prototype for me. We talked almost two days about the early computer days.

I gave John various glass and metal signs (one with a little dedication) as a memento and present (see pictures) to honor his work.

In 2019 I visited John and his wife again. We had lunch and talked a lot. Finally, John lent me his bare PCB board which I took back to Germany. 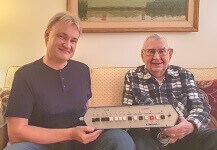 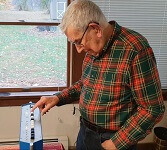 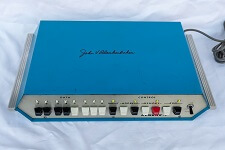 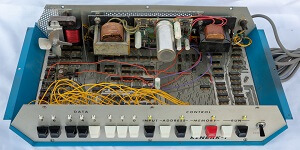 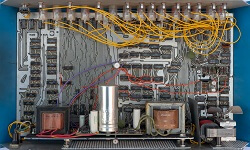 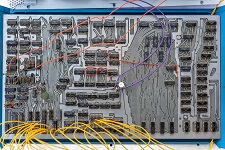 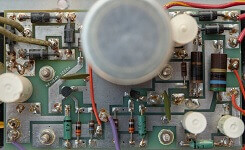 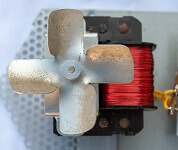 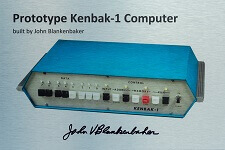 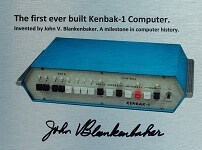 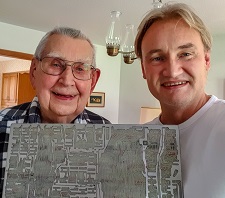 Any form of reprint or reproduction (including excerpts) only with written permission.

I preserve vintage computers including documents. And even gave rare items to museums. If you have vintage computer or related items to offer, feel free to contact me. Everything from mainframes to microcomputer made prior to 1984 are interesting for me.